Have you ever been in a position where it seems that somebody, or some people will go out of their way to harm you and/or your family?

This can be physical harm; or it could be emotional. Sadly, the latter seems to be tolerated or accepted and yet, the emotional harm can leave scars that can last a lifetime. The difference is, they are not always visible.

Those who are coping with parental child abduction and/or parental alienation know all too well the emotional effects on them personally whether they are a parent, a family member or a child.

The Fathers Rights movement group estimate that 24,000 men a year commit suicide as a result of family court issues. If this figure is to be believed, when you add this figure to women and children who are affected, the figures will be so much higher..

When you add this to other emotional abuses such as false allegations, bullying & cyber bullying, defamation, harassment, you can only imagine what the figures might be.

I will stress here that these are suicide rates!! MANY MANY more people suffer emotionally and sometimes physically each day from these type of abuses. So the question needs to be asked, is society doing enough to deter this?

I recall from my childhood the saying "sticks and stones may break my bones but words will never hurt me".. The facts are... "Words CAN hurt people" 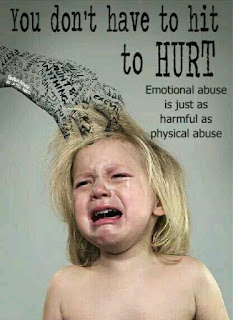 What would your response be if it was found that somebody or some people were targeting a family member or a friend? I would like to think that readers of this blog would do what they can to protect that person and not be a bystander or even become a "participant abuser". 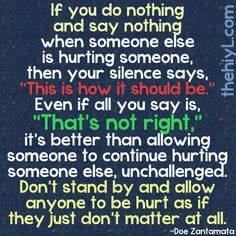 It is quite common in narcissistic behaviour that if a person is not successful in causing emotional damage to their target directly, that they will then aim for friends, associates, businesses and the general public in their attempts to harm that person. Whatever they feel their reason is, this weapon of choice can be a deadly one.

It is only recently that cyber bullying has become a crime. This is a positive step but unfortunately, the number of reported cases is low in contrast to the amount of times we see this occurring and social media themselves do very little to help the situation. They advise reporting and blocking but sadly, once an abusive/defamatory post has been publicly posted, the damage has already been done. No deterrent or accountability for the attacker. 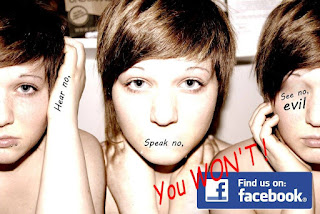 The advice for the target is not to respond no matter how tempted you are to do so but to gather as much evidence as possible and report the matter to the police. However, this behaviour is so common on social media, it could not possibly be policed effectively so the responsibility should be to the social media moderators and the public themselves.

Another huge concern about abusive social media posts are that sometimes they can come from somebody close to the target as they might have had private argument or debate over a personal issue. Social media should not be the platform to voice this. People need to start thinking of the power of this form of media. It can be an amazing tool to do so many positive things. However, when not used in this way, it can be a very damaging form of abuse

I watched a TV programme the other day where "celebrities" were given the opportunity to investigate and face internet trolls and it enforced my thought that these people are cowards who have very little life of their own so instead, they try to destroy the lives of others.. 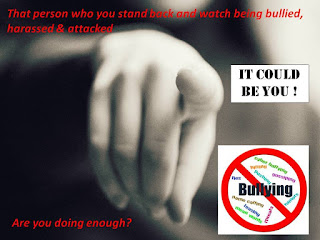 Next time you see somebody premeditatedly trying to inflict emotional harm on another, how will you act?
Posted by Steve Monk-Dalton No comments: Links to this post

For some time, I have spoken with a number of parents about the situations they have found themselves in and, through my own experiences, I can totally understand some of the emotions that have been shown.

These range from hurt, despair, even to the point of suicidal thoughts to frustration, anger and directing their despair towards not only the other parent, but also the authorities, psychologists, childcare professionals and the court system. After-all, they have all contributed to their child being "stolen" and/or "psychologically abused" haven't they?

Can you forgive the other parent for abducting / alienating your child?

However, we also need to take a serious look at how these parents quest for "justice" might be affecting their chances of reuniting with their children as it could be perceived as placing their children into a hostile environment.

Each case is very different but many have their similarities too such as false allegations, teaching/coaching fear and hatred to the child, frustrating any contact and many other heinous tactics. These behaviours are often ignored or dismissed by the professionals that an affected parent tries to put their faith and trust in so this often results in the display of despair and anger that I was referring to earlier. Added to this is the cost of litigation to actually fight their corner which can financially destroy a parent to the point of no recovery..

When affected parents react to this in a verbally / textually hostile or aggressive way, or in any other way that might show some emotional instability, this will almost certainly be used against this parent as a reason why they should NOT be reunited with their child(ren). Not only that, the perception could be that the parent has anger issues and is a reason why they do not see their child rather than the effect of the frustration, hurt and despair that is resulting from the emotional abuse THEY are being subjected to.

As parents coping with this situation, you should not lose focus about what is of primary importance to you... Your children's well-being and to be reunited; re-establishing a healthy parental-child relationship where you can be in your child's life.

Your child needs the loving parent they had... Not a broken shell of that parent..

Ask yourself this... What is most important to you... To "get justice" or to be with your child?

I can almost guarantee that if a parent continues down the road of blame and getting justice (even if justified), this will be an obstacle of where you want to be.. and will continue to be so the longer it continues.

I am not saying here that a parent should pretend that this has not occurred; nor am I saying that it can be easily forgiven - especially when the behaviour is ongoing. What I AM saying is that focus needs to be on what you can do for your child to best help him/her through this horrific situation. You cannot change what the other parent might have done but you can influence the future.

It is very important that you do not change from being the alienated to being an alienator if and when contact is restored. Time will restore it's own truths, children will grow to seek their own answers. Why would you want to hurt them with adult issues in their childhood? They have suffered enough through the alienating tactics of the other parent.

Should the other parent "get away with" what they've done (or what they are doing)? No... absolutely they shouldn't... What they are doing is abuse and these behaviours need deterrent and accountability.. but you are not going to change anything by taking a hostile approach other than giving that parent an excuse to say "I told you so".. It is playing right into their hands.. Don't give them the ammunition to shoot you with!

Is there an easy solution? No.. very sadly not... You cannot control the actions of the other parent nor anybody else for that matter but for the sake of your children, you really do need to try as much as you can to not react to provocation and whenever you feel hurt or anger, before acting/reacting, think about how your actions might impact your child. 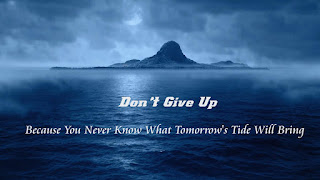 It is so important that you look after yourself and keep in mind that you need to do everything possible to build the foundations for you to be reunited and back in your child's life. Healthy mind and healthy body. Be productive, be positive and don't be beaten by this horrific situation.

Never give up and keep strong all..


Posted by Steve Monk-Dalton No comments: Links to this post

Reunite International Child Abduction Centre have organised their sponsored walk every year since 2010 and it is a great opportunity to bring together parents and supporters who have been in contact with them over the years. 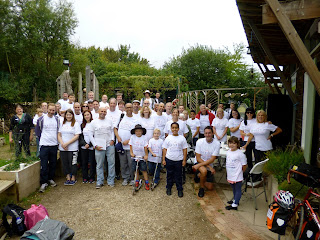 It is also a chance to raise money in support of their advice line so that they can continue to offer advice, information and support to parents and those affected by international parental child abduction. However the focus of the day is to bring people together, so there is NO pressure to raise money.

If you can come along or would like some more information please send them an email at reunite@dircon.co.uk or phone +44 (0)116 2555 345 so they know how many people will be there on the day.

We hope you´ll be able to join them. They also state that you please feel free to bring friends and family with you. 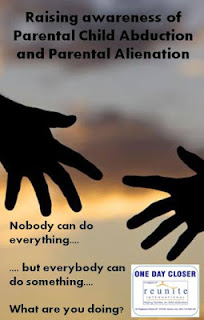 The team will be meeting at Stave Hill Ecological Park, London at around 10.30am and are due to start the walk around 12.00pm. Please give your support... One Day Closer will be there and you can sponsor us through our JustGiving page https://www.justgiving.com/fundraising/Onedaycloser-Reunite
Posted by Steve Monk-Dalton No comments: Links to this post 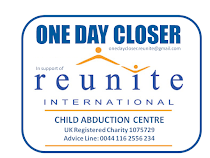